Denka, operating in the former DuPont facility in LaPlace, La., produces the chemical chloroprene which is used in the manufacture of neoprene synthetic rubber. Neoprene is used in a wide variety of products such as wetsuits and waterproof gloves, laptop sleeves, electrical insulation and automotive fan belts and hoses. EPA reclassified chloroprene as a likely carcinogen in 2010. That reclassification was reflected in the National Air Toxics Assessment (NATA) map released by EPA in 2015. The map showed an elevated risk for cancer in the area around the Denka plant in LaPlace, La. The referenced risk is an incremental estimate of the increased probability of developing cancer over a lifetime as a result of a continuous exposure to chloroprene.

What is the NATA’s purpose?

The purpose of NATA is to identify and prioritize air toxics, emission source types and locations that are of greatest potential concern in terms of contributing to population risk. EPA uses the results of these assessments in many ways, including:

The Louisiana Department of Environmental Quality (LDEQ) has worked with the U.S. Environmental Protection Agency (EPA) to gather actual monitoring data. NATA uses estimates of emissions and computer models to approximate risks; it is not designed to determine actual health risks to individual people. Six monitors are maintained by EPA in areas adjacent and near the plant. Additionally, Denka maintains six monitors of their own in and around their site. LDEQ receives data from both EPA and Denka monitoring.

Denka voluntarily agreed to take initiatives to reduce plant emissions. LDEQ worked with Denka to craft an Administrative Order on Consent (AOC), a legal contract, in which Denka agreed to install a series of new control technology and measures designed to reduce emissions of chloroprene by 85 percent from the facility’s 2014 baseline chloroprene emissions. Denka and LDEQ signed the document Jan. 6, 2017. EPA supports LDEQ setting an enforceable schedule to make the needed changes to the facility. Denka has voluntarily committed to spend more than $17 million to reduce chloroprene emissions.

Under the AOC, emissions reductions devices were installed on a set schedule, culminating with the installation of the Regenerative Thermal Oxidizer (RTO) by the end of the fourth quarter of 2017. All phases have been installed and are operating.

Over the course of approximately 18 months, monitoring date gathered by EPA has shown an overall downward trend in average chloroprene emissions at monitors around the Denka site. Monitoring data presented in the "Monitoring Results" section are from individual months and may not reflect the overall trend of emisions.

Once the control measures are in place, LDEQ will again assess the emissions at the Denka facility. While there is currently no federal or state standard for chloroprene emissions, EPA has offered a number as guidance. It is not an emissions limit.

Questions about the school

Some LaPlace residents voiced concerns about the 5th Ward School, which is near the Denka plant. The Louisiana Department of Health (LDH) and LDEQ conferred regarding the environmental status at 5th Ward School. LDH officials indicated they have found no reason that children cannot attend the school. Monitoring has shown spikes of chloroprene, not continuous exposure as defined in risk.

EPA is continuing to collect emissions data from monitors at Denka during the government shutdown but will not be distributing the numbers until necessary personnel return to work. The plant is also monitoring, and its fence line results are available in the EDMS system under the Agency Interest Number (AI) 199310.

Here are the most recent month’s monitoring results from EPA’s monitors: 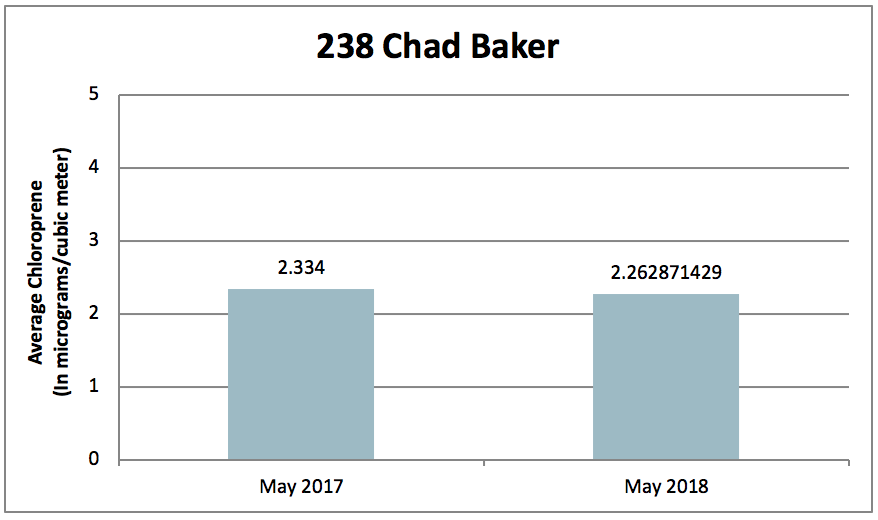 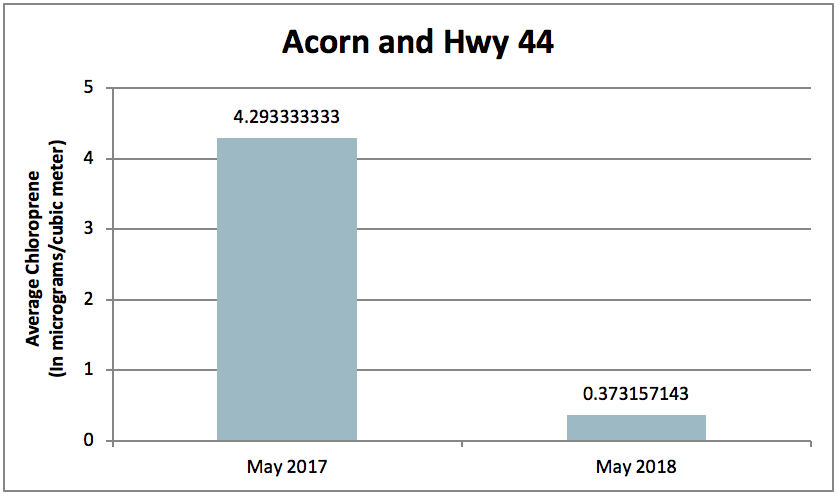 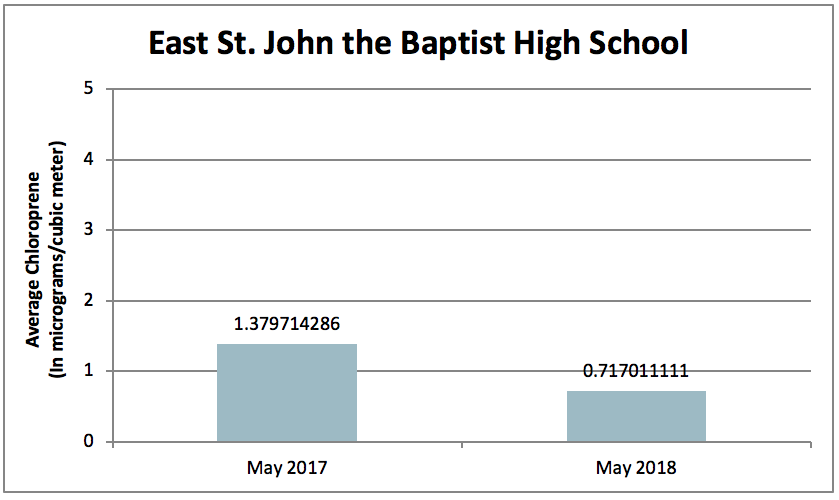 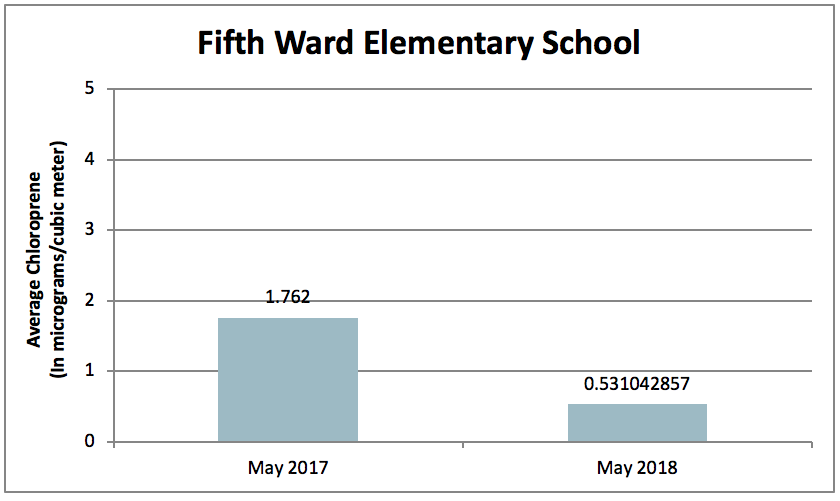 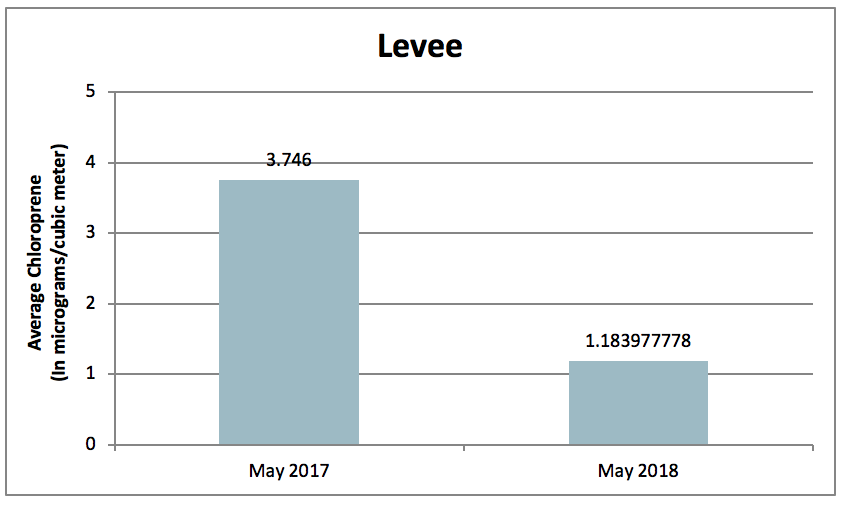 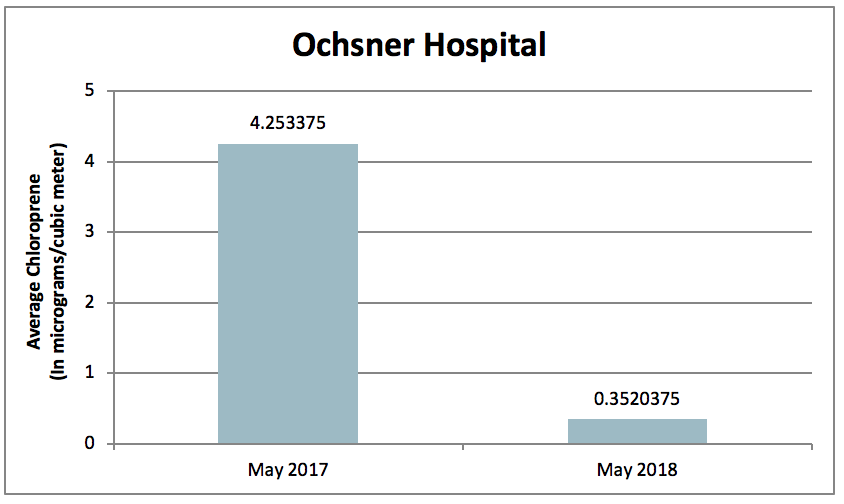 Reference Document For The Preliminary Assessment Of Chloroprene Levels In St. John The Baptist Parish
http://ldh.la.gov/assets/media/PreliminaryChloropreneAssessmentFINAL.pdf

You have been added to our Monthly Newsletter email list. Thank you for your interest!